We provide engineering services in the following fields: Structural health monitoring, measurement technology, dynamics and mechanical engineering. In addition, we work in research and development. This expertise is part of our project work and is a key component of our range of services. Our clients include road and rail infrastructure operators, as well as energy suppliers, industrial companies and companies from the construction sector. Our services range from conceptual studies to implementation – with the objective of realizing sustainable solutions professionally. We achieve this through the high quality of our services and the interdisciplinary cooperation within the BERNARD Guppe. 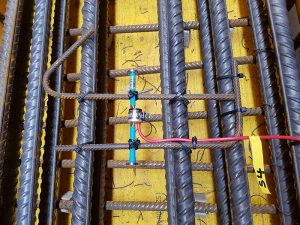 Civil structures for transport infrastructure, such as bridges, tunnels, and retaining walls, are currently subjected to two highly contradictory trends: On the one hand, these structures are getting older, and, at the same time, the load is constantly increasing. To guarantee the safety of the structures, decisions on maintenance measures must be taken.

Measurement results from monitoring systems, which are individually designed, configured, implemented and also operated by RED Bernard GmbH, provide the basis for these decisions. The analysis of the measurement results and further consulting are part of our core competencies.

A measuring or monitoring system can be installed on a purchase or rental basis. At the Client’s request, we create measurement software with evaluation and interpretation of the measurement data and transmit it via SMS, email or a website. In principle, our systems can be used for temporary or permanent measurements. 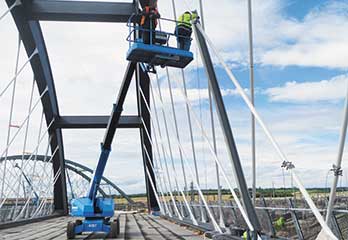 Dynamics
We provide qualified solutions to vibration and resonance problems in construction and mechanical engineering. Induced vibrations at buildings, machines and bridges caused by human beings, wind, waves, machine operation, traffic, earthquakes and other impacts are measured and numerically investigated using 3D computer models. With measurement results obtained from a real object, model adjustments are carried out and then different measures are simulated on the realistic computer model and evaluated for their effectiveness.

We also design mass-spring systems to reduce vibrations transferred in the sub-soil. By using appropriate vibration-damping measures, the maximum vibration amplitudes resulting from resonance can be reduced by up to 90%. 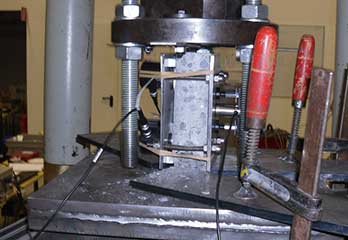 RED Bernard is an independent, scientific research and development company. Our scientific basis is the realization of self-financed and externally funded research projects, as well as the propagation research results by publication and teaching.

Contract research and development for industry and commerce is another field of activity for our company. We specialize in structural health monitoring, dynamics, measurement technology and vibration damping in construction and mechanical engineering. 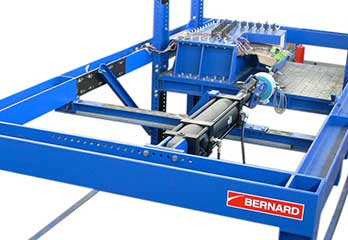 In the field of mechanical engineering, we carry out client-specific engineering services as partial or complete contracts. Our services range from the planning and development to the design of technical functional units or machines, including all design phases from strength calculation to the documentation and CE conformity declaration.

For existing machines and systems, we help our clients optimize the design and improve the functionality. On the basis of load measurements, dynamic FEM calculations and lifetime prognoses, improvement or remediation concepts are developed. In addition, we help other companies overcome short-term bottlenecks in 3D and 2D design. 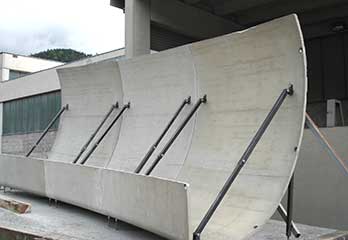 As part of a research funding program, an alternative to time-consuming and costly in-situ concrete tracks was developed on behalf of the Technology Center for Skiing and Alpine Sports in Innsbruck and with the support of the Austrian Luge Federation. Thereby, luge, bobsled and skeleton were intended to reach a wider public.

The result was a modular system that uses prefabricated precast concrete shells to reproduce the complex geometry of a luge, bobsled and skeleton track and completes the track with an adapted cooling system and in-situ or shotcrete additions. This technology for building artificial ice rinks was already presented in 2011 at the “59th FIL Congress” in Berlin.

Apart from the special challenge arising for the complex 3D geometry of the concrete shells, which was solved by using the 3D design program CATIA, the production of these shells, which are only a few centimeters thick, could also be realized and successfully tested on 1: 1 prototypes. In addition, the cooling system was optimized in a number of test series, in which thermal imaging cameras were also used, in order to minimize the energy consumption and thus the costs during operation when using the track under icy conditions.

With a simulation calculation program developed by the Technology Center, accurate speed and acceleration calculations were already carried out in the planning phase. As a result, the trajectory was ideally adapted to the external conditions, and the applicable building regulations for luge, bobsled and skeleton runs were considered.

Based on this we have already planned three tracks. For the track in Schliersee, Germany, the organizational course is currently being set for further planning. The track in Bludenz/Hinterplärsch, Austria, is about to be put out for tender.

RED Bernard is a Company of the